Women scissoring men, I like to compare to the act of an Anaconda slowing attacking it’s pray. Slowly enticing her victim’s body in deep between her thighs. Soon she will begin to trap her victim’s body between them, by tightening her clenched adductor muscles.

It will only then be a matter of time before, her pray will realize there is no room for escape! Only a slow malicious act will follow. As, she slowly begins to apply pressure, squeezing the victim’s body in question as if she is trying to strangle him, making it hard for him to breathe and further escape.

Often the first time many men have witnessed scissoring has been in the infamous Xenia Onatopp scene, in the James Bond movie Golden Eye. I have lost count of the amount of men, who would like to reenact this famous scene from the movies!

In the James bond movies, strong dominant but feminine females may I add, play a key role in the blockbusters and certainly do not shy away from the action either. Other confrontational scenes include the gypsy catfight in From Russia with Love and another scissor scene this time from Bambi and Thumper in Diamonds are Forever. 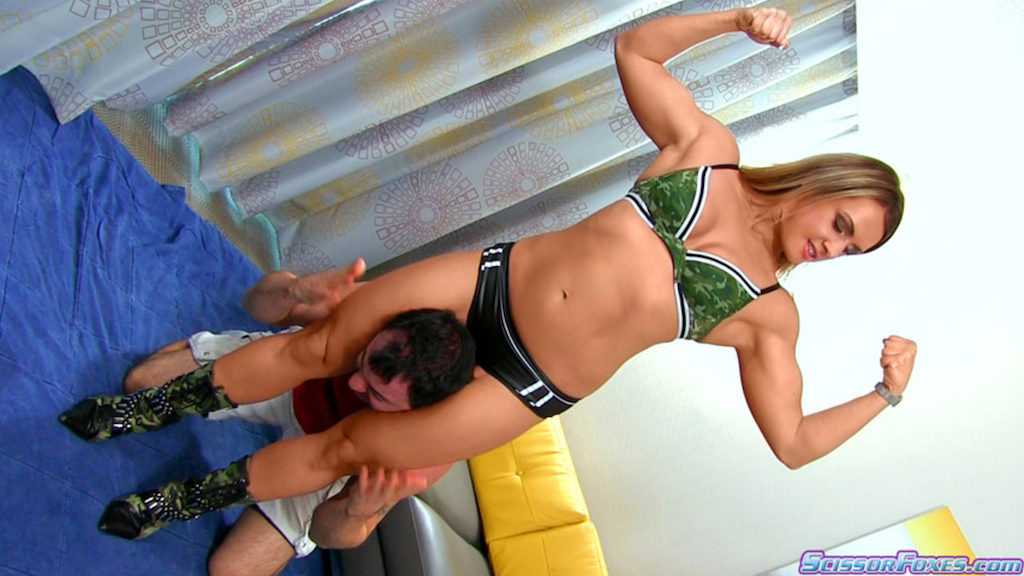 Women scissoring men and wrestling in the movies, has therefore been mainstream for a while. However maybe not have received the recognition it should have until now.

Mixed wrestling scissors make up a large category of pins in wrestling that are typically unused but popular among those that enjoy the sexually submissive element of grappling.

Why do men become aroused at the thought of being scissored between a women’s thighs? Well, it is thought that the act of squeezing itself can produce a sexual response on behalf of the receiver through feeling of helplessness, admiration or strength and complete submission toward the women scissoring them.

The position of the scissoring holds can vary depending on the desire of the person receiving them. While the scissor is typically practiced around the neck region, holds around the entire body of the submissive individual are not uncommon. Another very common scissor position is the reverse head scissor.

All holds are usually administered with the receiver on their back and the giver on top of them.

In sessions, I have even had smaller guys ask me to scissor there body, to include their arms trapped by their side. This completely paralyzes the receiver, forever trapped within my body scissor hold.

Some receivers do seem to like to struggle while they are being held to help amplify their feeling of helplessness. It is funny to watch how hard it is for a guy to escape, from between my thighs during sessions. In fact, after putting all one’s strength into attempting to escape, a recurring pattern of one becoming extremely still seems to appear. The feeling of dismay as one gives up, letting me demonstrate how easy it is for me to keep them under my control.

Muscle worship is also a common fetish associated with women scissoring men. Those who enjoy being at the receiving end of submission may find a lot of sexual pleasure through the admiration of strong dominant individuals. Due to the size and nature of the leg muscles, scissor holds can be incredibly difficult for individuals to break out of and the ultimate way to experience a leg fetish if you may have one!

The first guy is the kind of session guy, who will drain every last bit of energy out of you! Sessioning with Pain Junkies certainly makes for a good leg workout, as you will often find the harder you squeeze they will want MORE. It can be particularly frustrating if the guy doesn’t tap, obviously because he likes pain. However, what does this mean? Session girls will only crank it up until he does! Everybody must leave having tapped (evil grins).

Trapped Tony, is a completely different kind of session guy, he rather prefers a softer scissor session. He is a not a pain junkie and certainly does not like sharp snap scissoring. But instead, prefers if you keep him hanging around. I believe the reason these guys like a softer session is because they prefer the feeling of being trapped and a sheer loss of control, where the women can demonstrate who has the upper hand, but does not necessarily have to use her full power to do so.

It is usually also a more playful kind of style. Either that or these guys just simply want to keep their heads and ribs alive and functioning between my lethal thighs.

Why do men love scissoring? 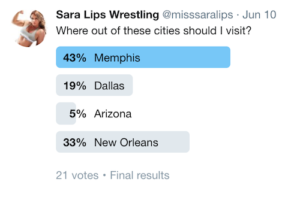 A while ago, I did a poll on “why men love the feeling of women scissoring men?” The results where pretty close with 45% of guys saying they liked the power/strength aspect best. 38% liking the loss of control and lastly 17% having a leg fetish. Of course some guys said they liked all three. Greedy!
Here is what some guys had to say in response to my women scissoring men poll on twitter.

Manolo Enrique : Love being scissored…incredible how powerful these ladies are, especially when your trapped between their thighs.

Ben Moore : Being Absolutely dominated by someone very feminine. Definitely all three for me as its hard to separate.

Wrestler Dave : No longer being in control and being at a women’s mercy.

Eric Grappler : I love how a woman’s thighs feel on the sides of my neck, not a painful triangle choke, more of a playful trap and squeeze.

Mikey Wrestler : The feeling of slowly being squeezed into unconsciousness by a strong woman.

John Sloss : The thought of someone sexy and powerful like you in control with your beautiful legs and toned muscular body.

Thank you guys for reading this post, I hope you liked being able to get an insight as to why other guys love scissoring. If you would like to experience a private scissor session with me, please check out my tour page to see if I am coming to a city near you.