Chyna, real name Joan Marie Laurer, was found dead in her apartment in Redondo Beach, on April 20, 2016. She was just 45 years old.

It is believed the 1990s WWE star, died of a combination of the tranquilizer Valium and sleeping pill Ambien. There has been speculation of her death being caused by an overdose. Despite her manger’s insistence it was not intentional

Laurer career began, in January 1997, when Laurie decided to drive to a WWE show in Massachusetts, as word of her build and athleticism began to spread around gyms in the wrestling circuit.

Here, she watched matches from the stands, waiting patiently after the event outside the locker rooms. Until stars Shawn Michaels and Paul Levesque, aka Triple H, emerged. Laurer then introduced herself and expressed interest in joining the company.

The rest is history!

After a brief discussion, a storyline was then born. Laurer would pose as a female bodyguard for some of the company’s biggest stars.

A six-foot powerhouse who could benchpress more than 140kg, Chyna debuted in Vince McMahon’s promotion as a bodyguard for Paul “Triple H” Levesque in February, 1997.

She was no ordinary Bodyguard though… Often helping the rising male stars win, by methods such as delivering low blows to the groin of their opponents. It was not long, until Chyna became a wrestling standout in her own right.

Ninth Wonder Of The World

Already a founding member of D – Generation X. Chyna’s star power and talent allowed her to go, where no other female wrestler had gone before!

After a little initial resilience, male counterparts became willing to let her overpower them. Chyna therefore became the first ever woman to ever take part in the Royal Rumble, in January 1999.

Shew was the first female who went all out at the guys. Furthermore, not afraid to use and demonstrate her power around them. She truly became WWE’s pioneering women who wrestled men!

Offstage her life was flourishing too. A bit of a loner when growing up, who found comfort at the gym. Chyna had found a family in the WWE ranks and a boyfriend in Triple H.

Triple H and Chyna were inseparable on the road, bonding over their dedication to a healthy lifestyle, lifting weights and a determination to plot their way to the top of the wrestling world.

Before Chyna, women in pro wrestling were generally dismissed in a male-dominated industry as sex objects. Wearing all skimpy attire that oozed novelty appeal for video games and posters in teenagers’ bedrooms.

Chyna of course wore skimpy attire too, but she was different. Bench-pressing 365 pounds, her blend of size and strength was so extreme, that even she felt awkward in the ring with other women and feared that she would injure them.

Due to her immense size and strength, Chyna could perform and make her mixed matches look believable. At 5 ’10 and 180 lbs, she did inflict considerable pain on opponents. The stereotype had been broken and it seemed that men had accepted the idea that strong women could dominate men.

Chyna, also presented for the first time a female bodybuilder physique to WWE. Bringing female muscle to the mainstream in a popular entertainment format! Generally, muscular and athletic women had not entirely been accepted into the mainstream, but in professional wrestling it seemed strong women became as popular as the men.

You could even say Chyna introduced lift and carry to many, through various lifting moves she performed in the ring. 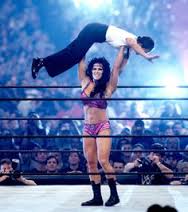 The trend of mixed wrestling continued in the 1990s to 2000s with more female wrestlers taking on male opponents. Beth phoenix wrestled male opponents in the WWE and was even called the Chyna of the 2000s.

Mixed matches however were being conducted less by the 2010s. The reason being that the WWE wanted to keep it’s PG tv rating.

Some advertisers had expressed concern that WWE’ s mixed wrestling had became too violent and so tamed it down to meet these demands.

Advocacy groups claimed ” it glorified violence against women.” To many this claim would seem ludicrous because in many matches, it was actually the women who did significant damage to their male opponents. What they failed to realize was that professional wrestling is an entertainment performance piece, not real life reality!

It was not long until tag team formats took their place. With the rule being that women wrestle women with their male counterparts while tapping in or out of the ring.

Chyna and Triple H’s relationship began to deteriorate around 2000. Eventually ending. Some friends claim it was because Levesque wanted children and Laurer did not.

After, Laurer sensed Levesque was growing closer with Stephanie McMahon — the WWF boss’ daughter and told friends she had searched Levesque’s briefcase, to find a love letter from Stephanie. Levesque married Stephanie in 2003.

Many speculate a broken heart contributed to Chyna’s decision to play hardball with WWE management which caused her exit to the show, when her contract was up for renewal..

The company claimed that it was her outrageous base salary demand — which according to Bleacher Report she refused to accept anything less than $1 million after being offered $400,000.

With singles victories over several prominent male wrestlers – including Triple H, Kurt Angle, Chris Jericho to name a few. Chyna left her mark in WWE history as the most dominant female competitor of all time!

After leaving pro wrestling, Chyna’s life plummeted from one crisis to the next.

Developing a crystal meth habit and beginning a relationship with wrestler Sean “X-Pac” Waltman. She and Waltman got engaged and filmed a sex tape. Waltman is said to have made $250,000 from 1 Night in China and estimates Laurer received significantly more. The teasing and shame that followed however drove Laurer deep into depression.

Laurer claims the tape happened to her. Telling thedailybeast.com in 2011 “It traumatised me. When that came out, I felt really duped. That was life-changing in a really negative way.”

Chyna went on to battle mental illness, attempted suicide and despite rehabilitation attempts — both in America and Japan — was never able to silence the demons inside her. 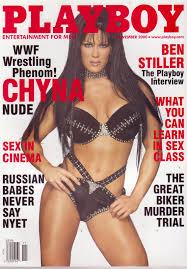 Instead of hitting the gym like she used to, she began swigging back Jack Daniel’s, smoking Marlboros and popping Valium. A concerned friend had went to check on Laurer and discovered the former Playboy model—who once earned more than $1 million in a single year—living with a homeless man in a tiny apartment void of furniture, save for a naked air mattress on the living room floor when she was going through her breakdown.

After a period of Rehab, however, it seemed Laurer had finally got herself back on her feet. She recommitted herself to fitness, drinking smoothies and protein shakes multiple times a day while stocking her pantry with vitamins. She even began posting videos of her life on you tube for fans

Laurer was on medication however for anxiety and it is said it was not uncommon for her to take multiple doses of Valium and Ambien each day, often following suit with a $9 bottle of wine called Barefoot Bubbly.

The Week Laurer died, she had not been seen or heard from for 2-3 days. As alarm bells rang, her manager called by her house to check up on her.

Upon arriving, there was no answer at the door. He did notice though, that the door was open. He therefore presumed she was in and let himself in.  As, he stepped into the hallway, he immediately noticed an odor.

There he found Laurer lying on her right side of her bed, neatly tucked under a white down comforter, sleeping peacefully. “There was no vomit, no blood,” Anzaldo says. “Her eyes were open. She was staring straight ahead.”

It was reported two pill bottles rested on a nightstand next to Laurer’s bed. Although toxicology reports have yet to be released, Anzaldo believes an accidental overdose of Valium and Ambien caused Laurer’s death. He insists, it was not a suicide death.

Gone But Not Forgotten

Either way, the death of Chyna comes as a shock for many. It is deeply upsetting to think of the challenges, some of use face alone, unknown to others . Her death only demonstrates, the difficulty some face in life, who may be deemed different for various reasons and therefore find it hard to fit into or become accepted in society.

Chyna you were one of a kind. Gone but not forgotten, you will always be the girl who kicked the guys asses. A true Glamazon, Strong but sexy as hell.

Chemistry vs Attraction | How often do you make it past the First Date?