It is hard to believe that it is just over a month, since I did my first Northern Europe tour and the privilege of meeting Anna Konda. This was my first time doing an extended tour, traveling between city to city. This also meant I got to use other forms of transport for a change. Instead of the usual airlines, such as the high-speed TGV train between Paris and Amsterdam, which I would highly recommend. I have even planned to travel this way again later this month when I tour Munich, Frankfurt and Dusseldorf in Germany.

I must admit that I am enjoying touring. It is wonderful to get the chance to meet so many different people, from all walks of life, as well as dabble in each countries culture.

I will try not to stereotype too much, but I also find it quite interesting to see how each countries session inquiries vary. I am not saying that everyone in these countries is like this, but for the majority of my bookings in each country. Here are just a few examples of what my sessions entailed.

Free spirited and young at heart, it was rather refreshing to see such young faces entering the session scene early in life. All of my bookings here were between 21-26 years old!

Strangely enough, this time around, most of my sessions where fantasy or role-play based Germany, however, I still call you German guys egotist :-p Even in fantasy based scenarios you will fight back. You guys are strong and definitely love a good sweaty competitive challenge

Well I never thought I would ever see somewhere as green or cold as Ireland! Maybe this is why you guys loved having me wrap my legs around you to warm you up. Stockholm was a good all rounder with plenty of requests for scissors, trash talking, muscle worship and sweaty grappling.

The streets of temple bar dawned my feet again, this definitely has to be one of my most favorite places on earth, if only it wasn’t for the rain. Here, I am lucky in that I always get to catch up with old faces, and it seems the more I session with you guys the more relaxed we become in each other and are able to get lost in time, try out new things and get to chat in general about our lives and society.

Lift and Carry was a firm favorite and I can defiantly say I felt like I had got a workout done. It was also great to even be introduced to some new moves such as donkey calve raises and glute bridges which I can now implement into my sessions. I would never even of thought of these for moves. I also got to have an all out competitive scissor session, which was fun, how you guys get a kick from it I will never understand as he even had me tapping for air on a few occasions lol, but I guess that’s all part of the fun!

In Dublin and Ireland, it was nice that the majority of my sessions where from people that I would now call regulars or good friends.

Being away for a long period of time can definitely be tiring when on tour.  This is why it is important to schedule breaks in between sessions or cities to recoup. I feel it is only fair, so everyone gets the best of Sara in their sessions. It would be no good if I were too tired to scissor or smother you to death!

I was lucky, during this tour; to have a few days break scheduled in the wonderful city of Berlin. Here, I got the pleasure of meeting Anna Konda and Red Devil. 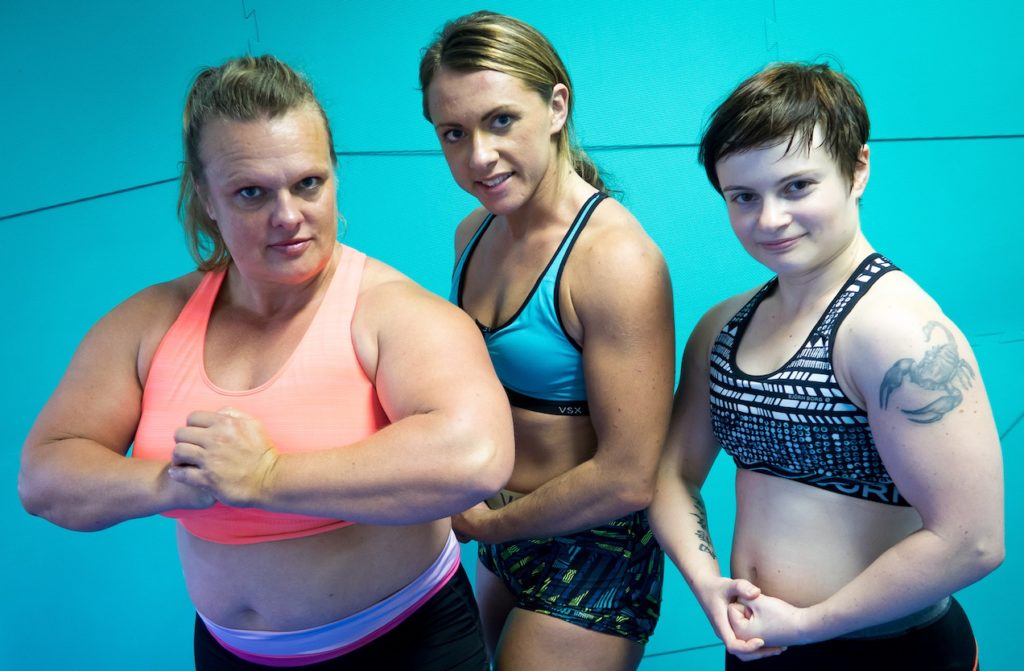 Anna, otherwise know, as Natural Born Dom is a power lifter, strong women and muscle dom. She is the owner and founder of Female Fight Club, Berlin

From our initial point of contact, I found when meeting Anna Konda to be very gentle, down to earth and a delight to communicate with. I was no fool though, as I knew this would not be the case on the mats! She is also very straight in her communication, and perhaps; why she is often know for being controversial and no stranger to the newspapers.

Berlin is rather a part of the world than a city

On my first day in Berlin, Anna meets me at the metro station near her studio and took me on a sight seeing trip around the city. It is always nice to get to see places from the local’s eye.
This was also my first chance to get to know Anna in person and ask her any questions regarding life as a session wrestler and how it all came about.  Anna was very open and honest about everything.

Like myself, Anna is no stranger to the weight room and is a very passionate lady about her training. She even makes a point to train every day. It comes first, but only on days where she hasn’t sessions, she likes to save up all her energy for crushing her victims ?

Not so different after all

I did find it interesting that Anna is like myself, in that she came to scene from the other end of the Spectrum, that being because she is a strong women. She too was approached to wrestle by a guy because of her strength and I guess the rest is history from there.

Even though Anna’s known for her incredible strength, she does not consider herself a bodybuilder. Instead, she loves her womanly curves, which she puts on display in a countless amount videos online. Not only a natural born dom, but a natural born physique. Anna wants to send a message to encourage other women to do the same. Love Your Body.

She thinks this often shocks people because they think a woman with a few too many pounds should hate her body, but the fact that so many men are turned on by strong or muscular women shows that this is not the case and the stereotype of society should be banished forever. I must admit when I saw Anna she was a bit smaller than I had imagined, but when I looked at her I could tell she trains and is very well put together, with a lot of muscle on her frame.

Leading onto independence, which is the philosophy behind Female Fight Club Berlin. The idea was that Anna wanted to build a hub for traveling independent session wrestlers to visit, train together, share techniques and of course collaborate together for footage if so desired. Female Fight Club Berlin was also to be unique in that nothing produced is fake, but rather real action!

Female fight club is not all about Anna however as Red Devil is a feisty little tank. Interestingly red devil was brought to the scene when she was researching for a sparring partner and found Anna! Red Devil’s skills are very good. She even took the time to teach me a few of her favorite moves. She is small so you have to be-ware, this means she is very fast, agile and flexible. Anna Konda sometimes calls Red Devil her alter ego. This is because Red Devil taught Anna many moves of her own, making her not only an explosive rocket, but skillful too.

Female domination and feats of strength

Her videos, which have been watched by thousands of people, have made her a cult figure in Berlin. These videos often feature her crushing watermelons or sheep skulls between her thighs, emasculating men, or instructing women on how to dominate. However, Anna is not without her critics. She says she has had social media accounts and videos deleted from Facebook and YouTube for being too “pornographic” even though they featured no nudity.

What did I think of Anna? I thought that Anna’s strength is actually scary, but impressive. Truly amazing to feel the strength of a natural athlete who has been blessed with such power. This is not to say that Anna cannot be defeated.